A downloadable game for Windows and macOS

"Fast paced, funny, challenging and tension building, this is easily one of the best games in the competition for me so far. 8 Days, 48 patients."

The junior doctors have done it again.

You told them having only one senior surgeon would end in disaster.

There are queues going out the door and everyone is muddled up.

Put the patients back together, and for god's sake don't miss anything out!

It's all drag and drop. Drag organs and other items to and from the bodies. Watch the patients' chart to ensure that you're getting them to the required level (80% for normal people, 90% for VIPs), and keep an eye on the pressure gauge to make sure your reputation doesn't fall too low.

"Fun, fun game. Accumulating body parts, trying to keep things organized (which I realized was important way way too late), sticking random stuff in patients just to get it out of the way, balancing who is important and who isn't trying to make sure you have a steady supply of the most valuable body parts ready to go (which was elbows for me, oddly enough, always short on elbows so I gotta be an elbow thief)."

"The graphics worked, the intercom voiceovers were fun, the actual gameplay was enjoyable, and I'm probably gonna play this again when I'm done judging to see just how far I can get. In fact, I would have played it more now, except that it crashed and caused me to lose all my progress. 9/10" (NB: This bug has now been fixed!)

"Critical Admission Hoo boy, this started out easy then got hard! Strangely satisfying to remove organs and make a big pile, too. I definitely loaded out VIPs with all the best stuff - they didn't need peasant normal elbows or guts, only the best. Which is Positronic Brains in every slot! As mentioned before a couple of times, I'm super bad at gaming, but still managed to get through a couple of stages before dying."

"It's probably been my favorite game of the jam thus far. I still haven't played that far in but it seems like you recorded a lot of different voice clips for the doctor. I think the idea is pretty cool though and micro-managing the different elements could be really enticing, I could see myself really enjoying this on a smartphone or tablet. "

"Starting Critical Admission I immediately got a Theme Hospital vibe from its cartoony graphics and audio design. Simple and a bit sketchy, the graphics match the game's (very) light-hearted tone by going with an Operation! approach, making its gruesome concept and horrific action palatable to the whole family. The constant stream of hilarious mock hospital intercom announcements feels straight out of Theme Hospital in the best way possible, with lots of variety and responsiveness to game states adding a huge amount of flavor.

I found the tutorial excellent in both explaining mechanics and pacing the player to slowly acclimate to increasing complexity. The diegetic interfaces and info displays being actual objects you can rip out and slam into patients (for better or worse) is clever as hell. It affords the possibility of hail mary plays where you save a patient by losing a part of UI functionality and that's something special.

Beyond being integrated really well, the specific mechanics of Critical Admission are great. There's a constant tension of trying to fix up each patient just enough that they don't hurt your reputation within the time limit, yet at the same time stealing away their better organs to be stockpiled. I'd fix somebody up to 80%, then rip out their healthy organs and replace them with ones of which I had excess numbers. To facilitate this organ flipping I'd neatly arrange body parts on the operating table and place 'good enough' objects next to their real counterparts, letting players drag and drop on the table to create their own system of organization is inspired. My first playthrough I screwed myself by throwing garbage and organs all over the place, and there's no worse feeling that reaching for a heart and getting a piece of jagged glass. It's unprofessional as heck!!

As for theme usage, Critical Admission's implementation of critical omission is superb. Obviously the game's narrative uses the hospital's critical omission of sufficient staff and time to explain the terrible care you're expected to provide incoming patients but, even better, the theme is also felt intrinsically within the core mechanics. As you play you realize the most important decision you make is which vital organs you can leave out of patients, allowing you to build up an organ stockpile for VIPs. Is it okay to take out a patient's heart for a future VIP if I replace it with a clock instead? Figuring out which organs are the critical omission that lets you get the most out of 80% patients is Critical Admission's core strategic concept, so I have to give it major theme props.

I did get a crash by forcing every UI object and tool into a patient (including the scalpel and next button), but fortunately not during any of my normal playthroughs. While the ambient sound design is great, some form of background music would be a nice addition. I really don't have much in the way of mechanical criticisms of this game as it was addictive enough that I immediately wanted to replay after a loss, but maybe its difficulty scaling in later levels could stand to be tweaked. You hit a point where you have 14 seconds per patient and cutting people open then parsing what needs to be done seems almost impossible. I'd have liked to see increased difficulty be more about added complexity and requirements for patients than the timer making it physically unfeasible to move the scalpel fast enough.

That said I don't think it detracts from the game as it's implemented currently, but more of something to think about if you decide to revisit and expand upon Critical Admission after the jam. I can imagine with themed levels and additional features (such as giving patients pockets that hold usable items or money to be stolen that's usable towards buying upgrades like auto-scalpels and bionic-brain manufacturers between rounds) this game could become very robust and probably marketable, especially on tablets.

TLDR: I really, really like this game. Its systems (including its integrated UI and info display) interact together splendidly and hilariously, with perfectly appropriate graphical and auditory accompaniment. It nails the theme narratively and mechanically, incredible work!"

- Windows version 1.0.1 released which should fix the crash which sometimes occurs around level 7 (does not occur on Mac)

Developed and designed by Jonathan Scott, Tom Blount, David Millard, Priyanka Singh, and Devasena Prasad, based on a game idea by Charlie Hargood. Receptionist voiced by Melanie Ehrlich. Other sounds from FreeSound.org.

All of the source code is available on Github. 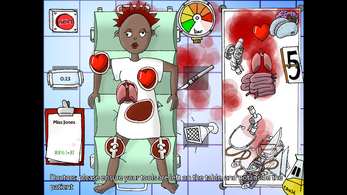 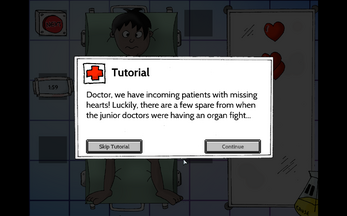 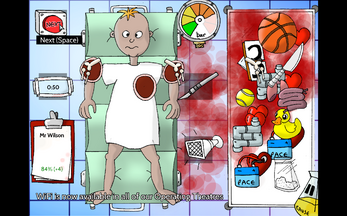 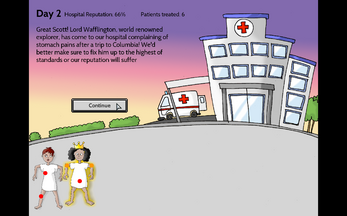 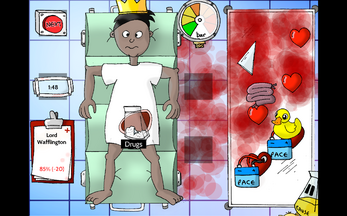 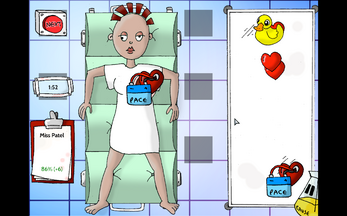 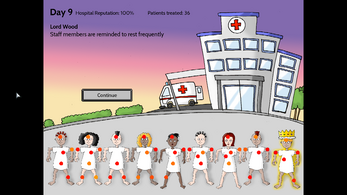 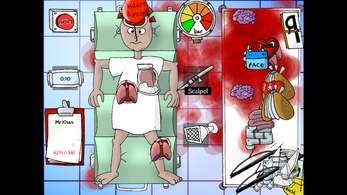 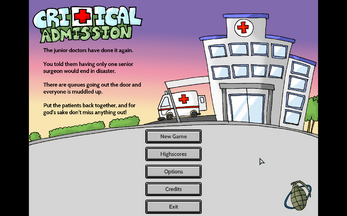