A downloadable game for Windows, macOS, and Linux

One player is the host of a party that has gotten out of hand, and believes there is a thief. They must kick out the thief before too many valuables are stolen.

The other player is a thief who has turned up uninvited to a party. They must blend in with other party-goers and steal as much stuff as possible before being found out.

This is an asymmetric multiplayer game with a cute Anaglyph-3D gimmick. Each player sees only their own player and immediate surroundings, but can be given clues to the other player's position when they make noises.

Currently button prompts are only mapped for DualShock4 controllers. You may have luck with other controllers but DualShock4 is what it's designed for. More controller configurations should be added in future.

Ensure your monitor has its colour calibrated correctly (see "Test Scene" below). If it is not correct then there will be bleeding and the game will not work well.

1. To start, buy at least 2 red/blue Anaglyph 3D glasses. Any paper ones should do.

2. Cut 2 pairs of glasses between the eyes.

3. With one of the blue lenses, bend the arm so it faces the opposite direction. Now align this with the other blue lense so the arms are aligned correctly for your ears.

4. Tape up the lenses to form a single pair of Blue/Blue glasses.

5. Repeat to create a pair of Red/Red glasses.

6. Test both pairs of glasses using the "Test Scene" (see below)

7. If one or both pairs of glasses are not filtering well enough, cut up another 2 pairs and  stick their lenses in front of the ones already on your custom glasses. This will make the filters work better.

To test that your monitor is configured correctly and your filters are strong enough, we have a test scene in the game.

This will show a scene with moving text and gradients suitable for one or both glasses. With a properly configured monitor and correct glasses, each set of glasses should only show the content appropriate for those glasses.

I don't have the materials to play this but my god is this a cool-ass idea. 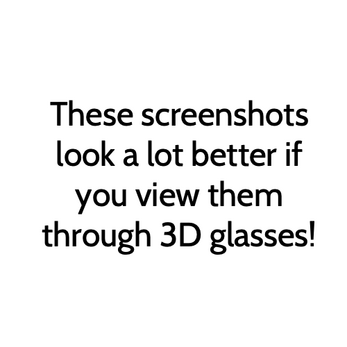 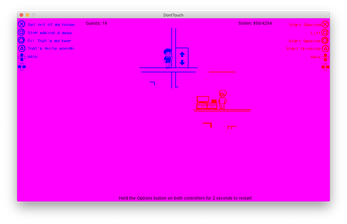 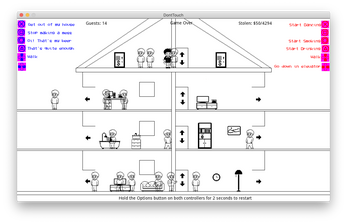 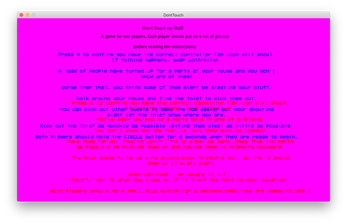